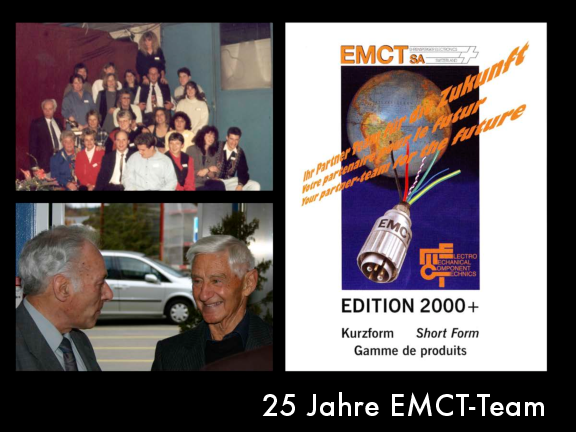 Max Ehrensperger from Winterthur, emigrated as a young man in the 50s of the previous century to the United States. He started his career as a dish washer, gardener, skiing instructor, etc. and later on joined Amphenol USA. In the late 60s he worked for Amphenol as the European Manager. In the early 70s he founded the predecessor company of EMCT together with his wife Hedy.

Tony Müller, a trained hoof and wagon smith with training in aircraft mechanics, started his commercial career in the former Swissair in Zurich. Headhunted by a connector supplier, over the years Tony became a strong competitor of Ehrensperger Electronics SA. He then joined in the company in 1980 together with his wife Cècile with the intention to take over the company. This was accomplished in 1985!

In the 90s, their four sons also joined the company. With the takeover of former Roschi Electronics, EMCT Swiss-ConnTec SA started with the development and production of Swiss-made piezo electronic alarms.